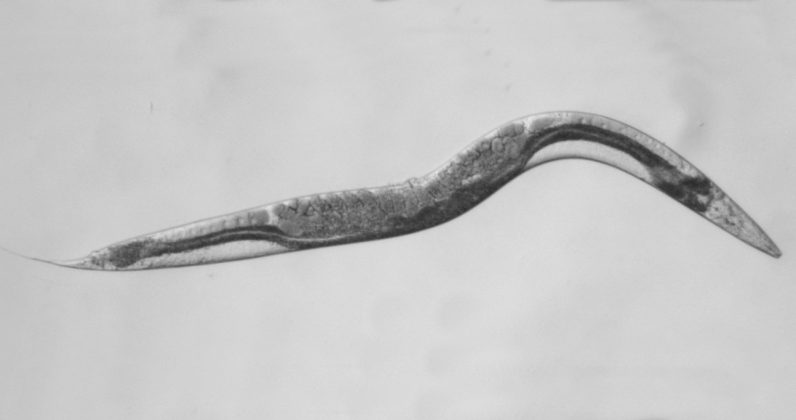 When the Williamson family from Dundee lost their mother Sue to a rare cancer named phaeochromocytoma in 2003, they didn’t realize that further devastation was to follow.

Of her four children, twins Jennie and James discovered that they also have the faulty gene that cut short their mother’s life. Both twins are affected with inoperable tumors wrapped around vital blood vessels and nerves in their necks. Father Jo decided to appear in a Cancer Research pledge video (below) in memory of his wife and to raise awareness of the important work that cancer researchers do for people like his children.

We have been working closely with the family to understand more about the gene mutation that causes this cancer. Along with a consortium of researchers from universities in Hungary and India, we have, for the first time, been able to recreate the Williamson defect in a tiny worm, just one millimetre long. This progress is vital to better understand the mutation, and it helps point to possible treatments for the cancer.

The cancer is called a phaeo. It pulses excessive adrenaline-like hormones into the circulation. Phaeo is hard to diagnose because it mimics conditions such as high blood pressure and can kill patients receiving routine anesthesia.

When symptoms occur in the young, phaeo may be picked up on imaging (such as ultrasound and MRI/CAT scans) with a high chance of phaeo-causing genes in their DNA. This is the case in the Williamson family, where mum Sue was the index case, but died of malignant-phaeo, despite the removal of a tumor in her twenties.

And even though two of her children carry this defective gene, the first modicum of hope is now on the horizon in familial phaeo after the family decided to find an alternative approach to their DNA mutation. The new hope fuses science, serendipity and a minuscule worm that has been around for hundreds of millions of years.

The defective gene in the Williamson family altered the structure of a protein called SDHB. SDHB has a very unusual function that needs an introductory explanation from science fiction. In the Back to the Future films, Doc Brown’s time-travelling DeLorean sports car is powered by a water-fueled “flux-capacitor” that can generate vast power. Now imagine that human life itself depends on the biological equivalent of such a device that fuels our internal power generation system. In biology, SDHB is like a flux capacitor that splits apart the sugar we eat into its constituent hydrogen and electricity.

So in the Williamsons, the puzzle lay in finding out how a tiny malfunction in one DNA instruction (mutant SDHB) could cause recurrent cancer in the family. In the past attempts by researchers to make a mouse phaeo model failed to yield insight because the mice looked healthy.

A new approach was needed. By genetic manipulation of DNA, our international group created a worm model of SDHB malfunction that has yielded some new data. We chose to model phaeo using worms because the worm equivalent of SDHB has remained substantially unchanged over hundreds of thousands of years.

So, despite the vast gulf of time that separates worms from modern humans, nature had not changed the DNA blueprint for this essential “flux-capacitor” that permits the energy generation needed for life. This power generator was perfected over 400 million years ago and still works unchanged in animal cells today.

The results are revealing because it was immediately obvious that the Williamson mutant worms are sick, sterile, small and sickle shaped. Importantly, the changed appearance can be further investigated by mating them with other mutant worms with other cancer-causing genetic defects. This is underway. In the meantime, a few conclusions can be drawn.

First, the Williamson family mutation does not delete the whole SDHB gene in the affected DNA. This family has a differently folded three-dimensional “origami” structure to their SDHB protein driven by the wrong instructions from their mutant SDHB gene. The Williamson SDHB protein is misshapen, exactly where fuel metabolism occurs. These worms also make so much less of this mutant misshapen SDHB protein. So Williamson worms have contributed something new to nature.

Second, Williamson worm power stations – or mitochondria, the part of the cell that transforms what we eat (proteins, sugars, fats) into energy – use a very different fuel mix. Normal SDHB runs like a car that can seamlessly switch fuel sources when one fuel runs low. Williamson worms cannot do this and they can only partially burn fuels to release lactic acid as a “frustrated” end product of glucose metabolism.

So when pushed to perform at their collective personal best, and despite plentiful oxygen trapped inside a tiny molecular cage or cavity made of iron and protein found inside all mitochondria, the Williamson mitochondria cannot effectively maximize their energy output.

Third, and rather excitingly, it is possible to kill Williamson worms with drugs that leave normal worms unscathed. This is where new hope arises because at the moment there is no cure for the Williamson cancer. The search is now on for useful drugs to test in animals, and the findings of this research mean they could now be developed.

Finally, SDHB has just been found to be abnormally controlled across a wide variety of common cancers which adds to the potential of this worm research. Which means that rare and common may well be different manifestations of the cancer process.