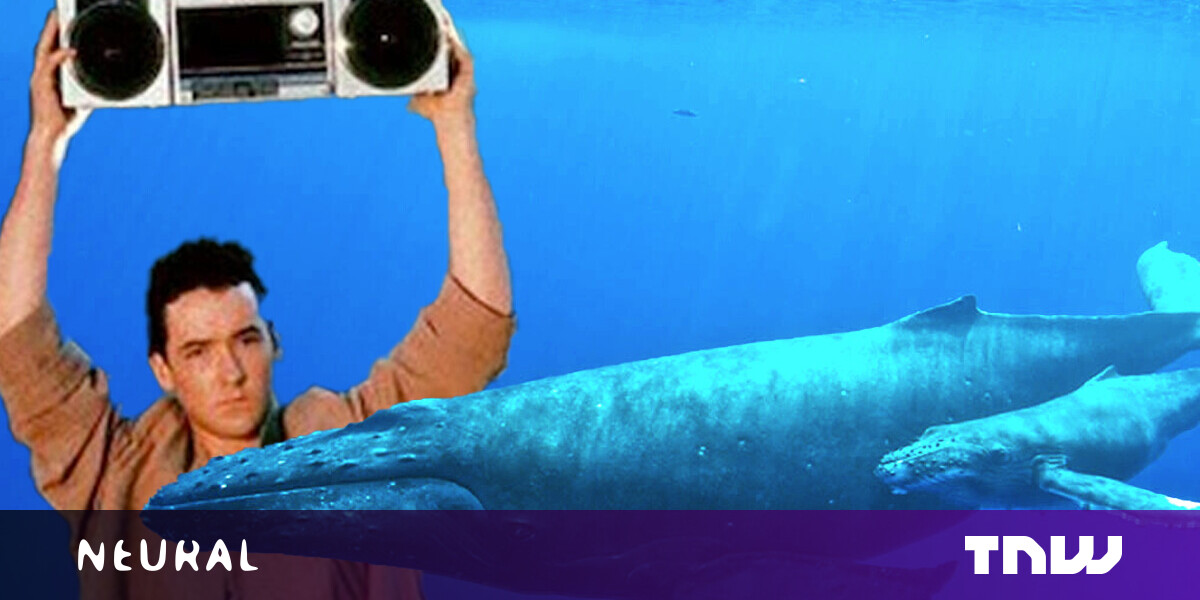 Imagine you’re a whale. No, not a person who holds vast amounts of cryptocurrency. An actual whale swimming in the ocean. You can think of it as a leadership or creative-thinking experiment if it helps.

You’re swimming along and chatting with your pod as you do whale stuff. Everything is pretty much the same way it’s been for about 45 million years.

And then suddenly a robot starts talking to you in your own language. You’re probably unaware that it’s a robot. I mean, it’s not like you know what artificial intelligence is or how underwater speakers work.

Even if you were as smart as a human child, you’d have no context by which to know that the sounds you’re hearing are being piped in from scientists on the surface.

You’d have to think it was… ghosts? Right?

A team of researchers from Project CETI (Cetacean Translation Initiative) recently began working on deciphering the language of sperm whales.

According to an article in Hakai Magazine, the ultimate goal of the project is to train an AI to speak to them in their own language:

The clicks of sperm whales are ideal candidates for attempting to decode their meanings—not just because, unlike continuous sounds that other whale species produce, they are easy to translate into ones and zeros. The animals dive down into the deepest ocean depths and communicate over great distances, so they cannot use body language and facial expressions, which are important means of communication for other animals.

The big idea would be to train a neural network to interpret the whale’s speech in such a way that we could, essentially, say hello.

There are huge implications for this and most of them aren’t really about becoming best friends with whales. We’re not talking about a paradigm where, one day, we could get marine weather reports from giant whales wearing translation helmets or something.

Scientists could uncover new ideas about human language by comparing how we communicate to how whales do. But such knowledge would require us to formulate a sort of Rosetta Stone for whale language.

Right now, the CETI researchers are just beginning to work on the problem of identifying the different clicking sounds sperm whales make and figuring out how to train an AI to recognize them. Over time, the team will have to label their data manually through observation of whale behavior.

Basically, we’re going to record the whales and then yell stuff at them in their own language and see how they react. This is pretty cool and, to be fair, we do some pretty wild stuff to rats and other mammals in the name of science. Why not whales?

But, I mean, how are the whales going to interpret this? Sperm whales dive down deep where they can’t see each other. They communicate with complex language because knowing where food, threats, and each other are is crucial to their survival.

And they’re obviously not navigating by landmarks when they’re too far from the surface for sunlight to penetrate or it’s dark.

What happens when we start adding noise to their language? Maybe the whales will instantly recognize the aberrant voice as something unlike them and ignore it. But what if they believe it?

What if scientists are out there shouting random stuff they’re pretty sure is cool, but the whales are hearing some end-of-days rhetoric telling them that all is lost and it’s time to swim into the abyss?

I’m not an expert on whales. And, to be honest, I think it’s worth the risk. Because it’s super far-fetched to think that an AI paradigm could cause whales to dive into an underwater volcano or something.

It’s much more believable to imagine CETI will be able to use this for whale conservation than for whale conversations. And that’s the speculation we should be engaging in.

Elon Musk didn’t ask the general public to agree to any terms of service when he unleashed his artificial intelligence experiments on us.

Without regulation, AI researchers and entrepreneurs are pretty much free to do whatever they want. So ultimately it doesn’t matter whether you’re a human or a whale. It probably should.